No pain no gain

What an exhausting day, both physically and emotionally. A day that everything that could go wrong, did. But there was a happy ending to the day. Yesterday evening my mate Stu exploded with a Pallas's Grasshopper Warbler (aka PGTips) at Burnham Overy. I could not make it yesterday, so this morning I met up super early (again) with James to get to the spot before dawn. We searched for the bird for a couple of hours with a few more tens of people, without success. Dave and I did our very best, alas without reward. It was very windy and cold, and things really did not look good. After the relatively clear night, we all thought the bird had made a move. James had to make a forced early departure, so I thought I'd be a responsible adult, return early to Norwich and go to work. Fail. 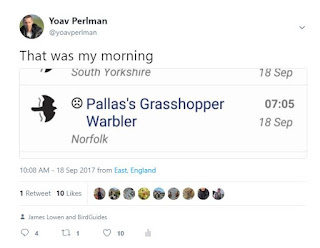 Of course, as soon as I got back to Norwich news came of the bird been seen. And again. Another friend, Robin, was heading out there, so I made the quick decision to return to Burnham Overy just few hours after leaving there, demonstrating again that I am not a responsible adult. Arrrgh. While we were on our way, we got some gen that those earlier reports might have been unconfirmed. Noooo! But it was too late to turn around, so we headed on and decided first to visit the Arctic Warbler at Wells Woods and wait for the pgtips to get nailed. The little arctic sprite was easily located by the hordes of twitchers looking at it. It kept high in the treetops, and was pretty mobile, but it did show alright and I even got some half-decent pics: 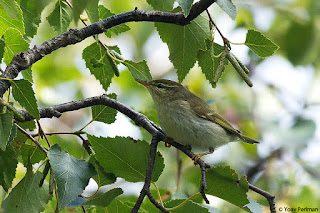 Smart little bird, but not the one I came for 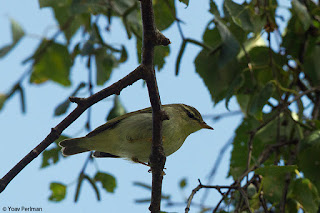 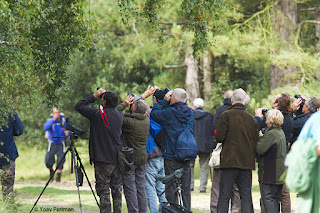 I wondered off with some mates to search for more birds but it was really quiet in Wells Woods. Then I returned with Robin to the pgtips site. We were greeted by quite a large crowd gathered there - gotta love Norfolk birding: 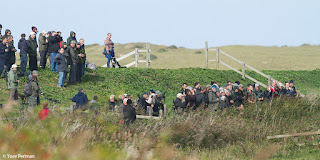 For a couple of hours we saw nothing. Then we saw even less. Things were looking very bad. Had the bird really disappeared? A total fiasco was looming. The wind was still blowing strong, and there were few birds to be seen. I walked and worked very hard with another mate, Ashley, and we didn't produce much more than this Reed Bunting: 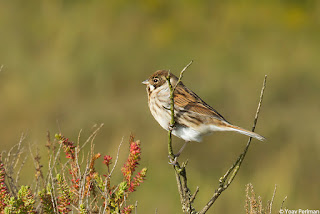 But then Ashley saved the day, spotted THE bird briefly, and madness began. Over the next hour or so a handful of us had some brief views of the bird. It did give us the runaround, and never gave itself up. Personally I saw it twice - once in flight, just enough to appreciate its large, dark tail. Then I saw it again in the reeds - I had a good head-on view from very close (3m?) - I saw well the bold supercilium, spotted breast on a yellowish background and streaky back. Phew. I was so pleased with this WP tick - one of my most wanted birds. I hoped for better views, or even a photo? That will wait for the next one. For the time being, celebration time.

It was nice to welcome back the Pink-footed Geese. I estimated 3000 birds. Welcome winter. 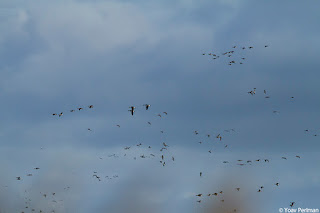 What a day. Now, good night.