What proper birders do

This morning I wanted to go birding. I Needed a change from scoping distant shorebirds at Breydon, so I decided to scope distant seabirds instead. The forecast said NW winds, but eventually the wind was more westerly. Anyway, bad conditions won't stop me. At 06:00 I was at Cley beach hide, and the first bird I saw through my scope was an Arctic Skua at mid range - cool. It was followed shortly by another four skuas - 1 dark Pomarine and another three Arctics, at mid-long range.


Atmospheric shot of an Arctic Skua (couldn't get the pom) 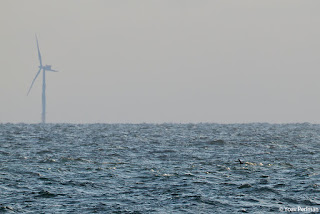 These were promising first two minutes. I was there until 08:30. It wasn't that busy all the time but there was enough stuff moving through to entertain me and some of Norfolk's finest birders who happened to share the shelter with me. A steady trickle of Common Scoters and other ducks, some more skuas and shorebirds headed west. We had another skua that might have been a / the pom again, but too distant for positive ID. There were many hundreds of terns feeding offshore - Sandwich and Common. 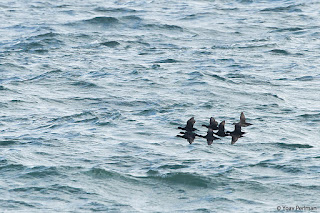