What a day, very intensive emotionally. One of these days that demonstrate to me how birding is the best therapy. This morning after seeing the boys off to school I headed up to Flamborough to say goodbye to my dear friend Martin Garner (see also here). On the way to King's Lynn I stopped briefly for the 2000ish-large gull flock near Middleton. I had wanted to check this flock properly many times before but never had the chance. Today I couldn't resist, but I was not focused - my mind was elsewhere. I had no time and patience to get the scope out and work them properly. A quick scan with bins revealed no unusual gulls, so I thought I'd be a wiseguy - I took a video of the flock planning to check them on the computer screen at home and fish out all the caspos hiding in there. Of course the plan didn't work - my video movements were too quick and shaky and it was impossible to identify anything. Later on some proper birders checked the flock and found a caspian and 6 yellow-legs in that same flock. Well done. 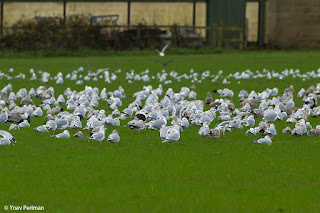 In King's Lynn I met up with Terry who joined me for the drive up to Flamborough. The connection with Terry was immediate, as often happens with fellow birders. Sadly grim circumstances to meet for the first time, but it was great to meet Terry at last. Anyway, we started heading up, talking about Martin and about China and all kinds of stuff. About halfway I got a call from close friends advising us not to come. So we made a U-turn and head back, sad and frustrated. As I had already taken the day off and couldn't think about getting any work done today, we decided to go for Plan B and headed over to N Norfolk for few hours of birding.
We started off at Brancaster Staithe (Terry you were correct - it's a place for loading or unloading boats), where a Red-necked Grebe has been showing for the last couple of weeks or so. We didn't even need to step out of the car - the bird was on show immediately in the canal by the beach carpark. But we did step out of the car. At first the grebe kept its distance but slowly it approached us and eventually was pretty close. Pity the light was poor. Quality bird, though I'd rather see this one in Israel.
Red-necked Grebe 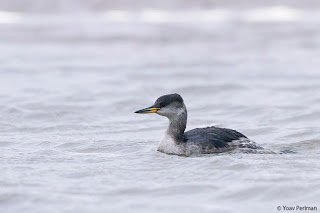 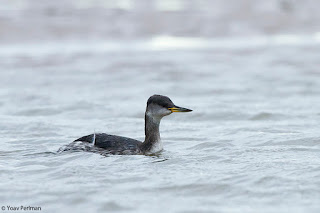 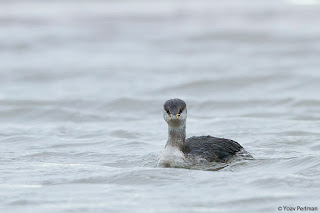 Quite a few other birds around. Of note was one Goldeneye.
We then continued to nearby Choseley Farms. We positioned ourselves on top of the hill. It took us some time to connect with a Rough-legged Buzzard after seeing about 10 Common Buzzards. At first we had distant scope views sat on the ground. Then we approached it along the road to get closer views. I walked out of the car without the camera to see if it is on view from the new angle. Then it decided to fly off, heading towards us. Dashed back to the car for the camera but by the time I got it out the buzzard was already heading away. And as if at noon the light wasn't bad enough, now at 15:00 it was getting dark. So these are horrible record shots of another quality bird. 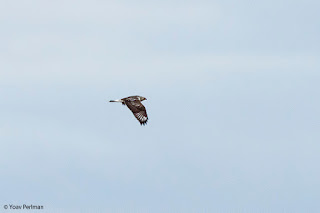 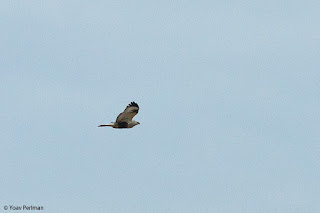 Other birds in the area were about 30 Corn Buntings, and several Fieldfares. Nice to bump into James up there. Then Terry and I parted and I drove back home to Norwich.
פורסם על ידי Yoav Perlman ב- 12:10 AM