Good birds for the New Year

Yesterday I was out for the first time after too long. I went ringing at my site in Ashdod with Re'a and Arad. It was a typical and good autumn morning. While setting the nets up we had Nightjar and Long-eared Owl flying around us. Early in the morning the air was filled with migration sounds: Tree Pipits ending a night of flight; Wrynecks giving their kestrel-like calls; shrikes croaking from the reed-tops. We had a good catch with lots of Willow Warblers and a mix of other acros. Later on we started catching a surprising number of sylvias, and ended up with six species - Lesser and Common Whitethroats,  Blackcap, Sardinian, Garden and (bird of the day) - Rueppel's. It was a rather advanced 1cy male. In spring they're rather common, but in autumn they're much scarcer. This is exactly the correct time for them. I catch one at Ashdod almost every year. 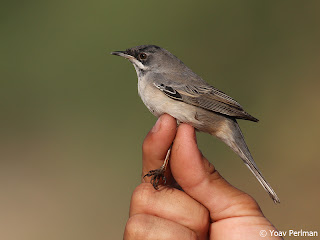 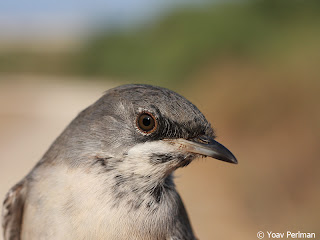 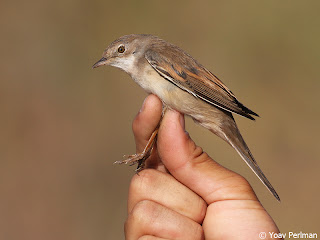 It was still very hot se we closed early and went for a quick look at the Ashdod ponds. We were surprised by the extraordinary number of shorebirds and gulls, perhaps the largest numbers I have ever seen at this small site. We had about 800 shorebirds - mainly Little Stints and ringed Plovers. We started scanning and Re'a and myself got onto a Red Knot exactly together and shouted it out simultaneously. Common on both sides of the Atlantic, Red Knot is a good rarity in Israel and this is the first record for Ashdod. But apart for the knot we found nothing out of the ordinary. Good numbers of Marsh Sands and Temminck's Stints were nice. One Citrine Wagtail among the many yellows. Nice adult Lesser Grey Shrike. Good birding. 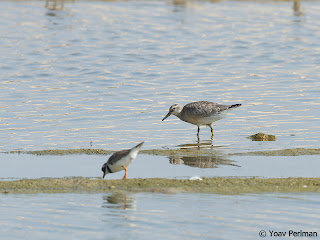 I started working through the 200 gulls to look for rings but had only one bird with aluminium ring only. About 150 gulls were baltics (lots of juvs among them) with few armenian, yellow-legged and about 10 siberians. Note the small and extremely worn 2cy Armenian Gull in the front left of this image: 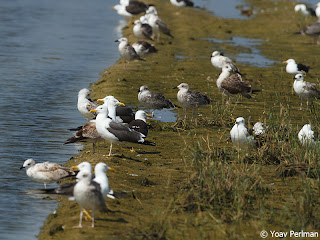