This morning I was home after a sleepless night due to fever and nasty coughs. I was quite knackered when at about 10:00 I received a phone from Darren Burns, who said he had a probable 1cy Taiga Flycatcher in the hand. Suddenly I felt much better. I quickly went over the ID with him, sent the news out and headed off.
I had the possible first for Israel in 2007 (see images here; also article published in BW, 2008). It is still under circulation by the IRDC, but it should get accepted soon. But since Sde Boker is not too far away from my house, I decided to go for it.
When I got there Barak and Meidad had already arrived from their Sooty Falcon fieldwork nearby, and we started discussing over the birds' ID. A few minutes later Oz joined us.
When I first saw the bird I was quite troubled by it's 'warmness', especially across the breast band and on the flanks and underwing coverts, that were rather bright buff. Also the upperparts were brown rather than grey, and the pale tips to GC and tertials were rich buff and not white. This was very different to what I remembered a 1cy taiga should look like (see Hugh Harrop's excellent images here).
However, this bird had some strong pro-taiga features, including bill pattern and uppertail coverts. From a distance (through bins), the bill looked completely dark and strong. When seen from below, 2-3 mm of pink at the base of the lower mandible were visible. The uppertail coverts were jet black. In some angles and light conditions they looked darker than the central tail feathers, while in others looked just as black. The uppertail coverts had paler grey fringes.
We released the bird, and hoped to be able to watch it in the field and hear its call, but it just vanished and despite intensive searching it could not be relocated.
We drove back home with mixed feelings, but when I got back home later in the evening I went through some useful articles (Jännes, Alula 1996 and Cederroth et al., BW 1999) and now I am leaning towards taiga, based on these features:
At the moment the identification of this bird remains open. We will consult with some experts, and hopefully will be able to reach a final verdict soon.
Many thanks to Darren for alerting us on this intriguing bird and for his hospitality. Darren will upload more images on his blog tonight or tomorrow.
Possible Taiga Flycatcher (Ficedula albicilla)
Note the black uppertail coverts: 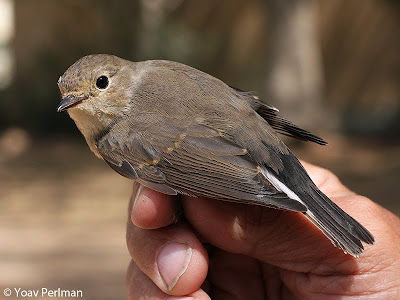 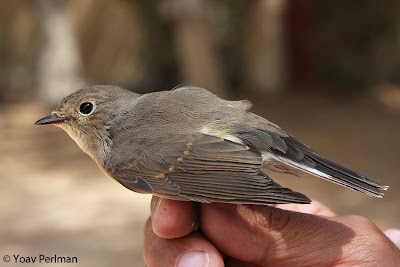 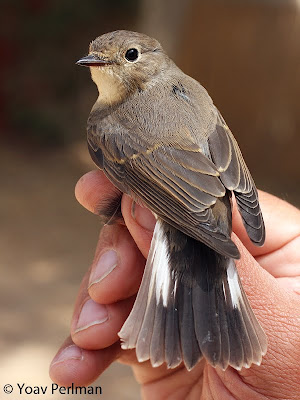 Note the tertial pattern on the distant wing - pale tip extending onto the outer web: 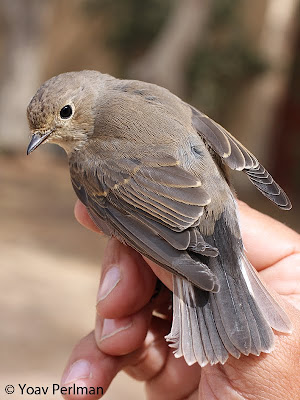 This image was taken with my 400 mm lens - closer to how it would look like in the field: 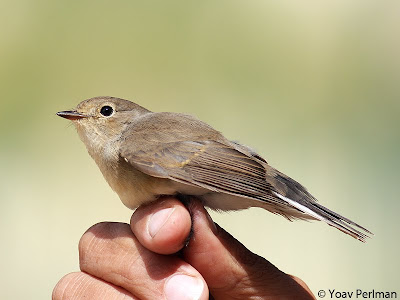 Close-up on uppertail coverts and tertials: 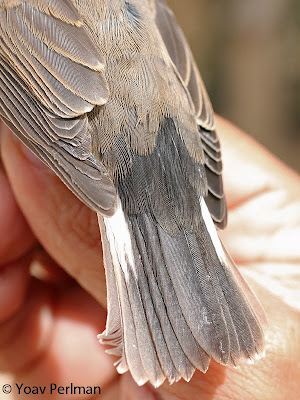 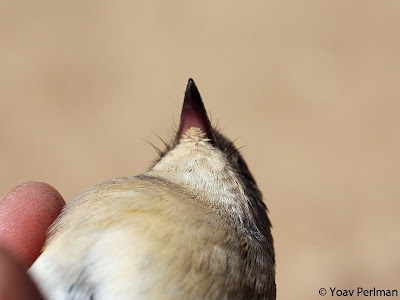 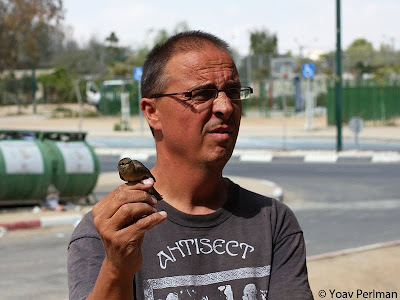