The bad weather in Israel continued, and yesterday a serious system hit our coast. I guessed that birds would avoid the storm epicenter and make landfall farther south. So this morning I went birding in Ashkelon NP with Piki and Yossi, and I guessed well. Soon after starting to walk we realised that the coastal scrub is absolutely dripping with migrants. It was also dripping with water - rain downpours passed us every few minutes, so the birds were very wet, as we were. It really was exploding with birds. By far the most abundant was Lesser whitethroat - we made a conservative estimate of over 600 during our walk. They were really everywhere, jumping up from the wet grass every step we took. Also Blackcap and Chiffchaff were present at very high numbers. It was difficult to capture this magical experience in photos, but the sights of tens of warblers in every bush were very impressive.
Lesser Whitethroats 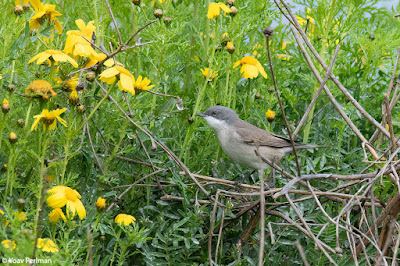 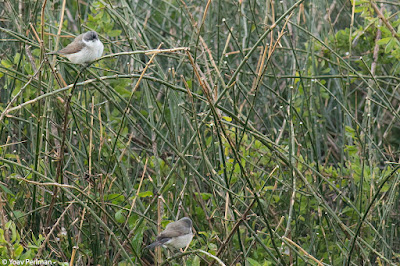 There were exceptional numbers of Rueppell's Warbler too - we estimated 45. They were very vocal and typically showed very well, jumping out in the open. Also Eastern Orphean Warbler was well represented.
Rueppell's Warbler 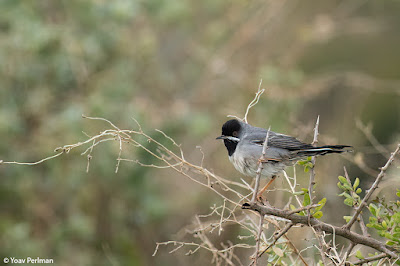 There were so many other birds - tons of Cretzschmar's Buntings, pipits, nightingales, and some quality in the form of Richard's Pipit, Sibe Stonechat, Blue Rock-thrush. In fact, at some points it felt like there were too many birds, and it became impossible to check every bird. Certainly there were too many birds for photography - birds were jumping and moving in every direction. For me this was a peak day, one of the most impressive spring falls I have ever seen on the Mediterranean coast in spring. A day to remember.
Cretzschmar's Buntings 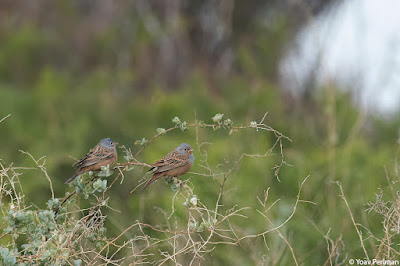 It was certainly hard to focus when at every time I quickly looked at the sea it was evident there were birds out there - skuas, shearwaters, gulls and terns - but we did our best to stay focused on the migrant landbirds.
'Baltic' Lesser Black-backed Gull 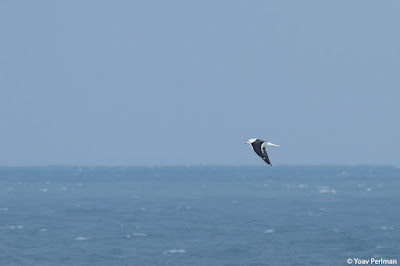 It was difficult to ignore the local Hoopoes, busy feeding their young. 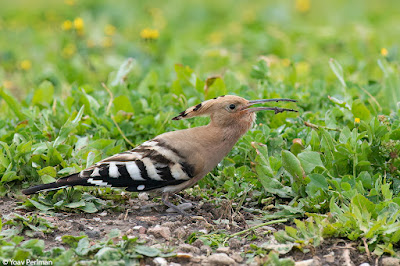 Eventually the rain stopped and we just had a lovely time. Thank you spring.
eBird checklist here. 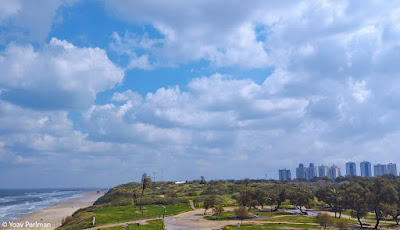