The past week has been very frustrating for me. Israel is experiencing an amazing run of Asian vagrants, including two national firsts. I have been somewhat involved indirectly with those, but have not seen them. Just to clarify, I claim no credit for these records; all the fame and glory go to the finders.

In the evening of October 31st belated news broke of a Black-faced Bunting that had been ringed in the morning at Hefer Valley Ringing Station:

As soon as photos of a strange bunting went online I thought to myself 'what on earth is this bunting?'. Yosef Kiat was the first to blow the whistle. Frustration #1 - had the bird been identified immediately, perhaps I had a chance to see it?

Next morning (November 1st) I was there first thing. Incredibly, there were just three birders searching - Barak, Avi and me. Imagine this scenario in UK... The weather was horrendous, and we failed to relocate the bunting, not for the lack of trying (eBird checklist here). Frustration #2.

Next day (November 2nd) I had work to do at the JBO, enjoyed a Yellow-browed there and added Woodcock to my yearlist nearby at Gazelle Valley. 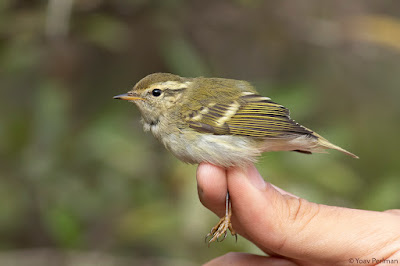 Frustratingly, my birding session at Gazelle Valley was interrupted by belated news, again, that the Black-faced Bunting had been seen again (but identified only retrospectively from photos online) few hours after we had left the previous day, about half a kilometer away from where we searched. Arrrgh! Frustration #4. I sped back to Agamon Hefer, again to meet Barak and a few others. Nothing. No sign. This pretty Caspian Stonechat improved our mood by just a bit. 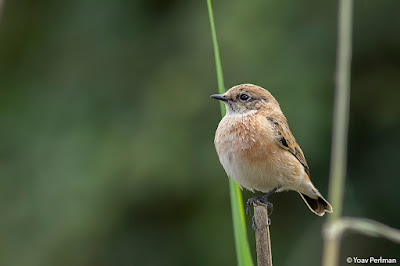 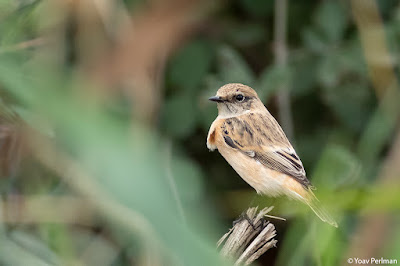 Next day (November 3rd) I was ringing peacefully near home, when Noam Weiss calls me, in a state of hyperventilation, asking me for help to identify an interesting bunting that had just been caught at IBRCE. I went with Noam over ID features, and we identified it as Chestnut Bunting - another national first, four days after the Black-faced Bunting. Amazing! What's going on? Frustrating to be part of the effort without seeing the bird (frustration #5).

Yesterday (November 4th) I did my monthly point count morning at Ma'agan Michael. It was in fact an excellent morning, tons of birds, so many species (eBird checklist here). I tried really hard but saw nothing more special than a Richard's Pipit. Before leaving I joined Itai Bloch's ringing team for a short while, good fun, until I had to leave.
This morning while birding near Tzor'a, guess who calls me. Itai Bloch. 'Please help me identify this bunting'. I video call Itai on WhatsApp - bloody Rustic Bunting. Arrrrrrgggghhhhh! I was there yesterday! Bastard bird. Frustration #6.
Imperial Eagle 2cy - much better than a bloody bunting 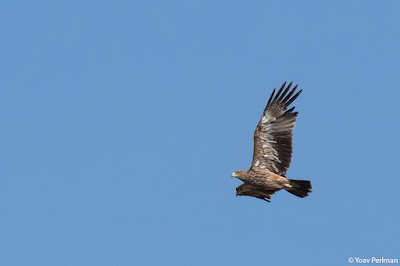 Caspian Stonechat - so much better than a bloody bunting 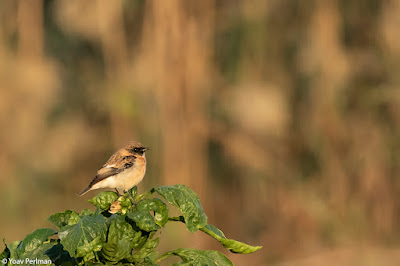 A short while ago news came from Eilat that the Chestnut Bunting resurfaced and is being seen. There are so many good reasons for me NOT to go for it tomorrow. Don't know if I will. May the force be with me.
פורסם על ידי Yoav Perlman ב- 11:35 AM