Yesterday I joined a pelagic trip off Eilat, deep in the Gulf of Aqaba. We left relatively late in the morning, which left time for an hour of birding first thing at IBRCE. To be at IBRCE we (Amir, Piki, Rony and I) had to leave home stupidly early. I always enjoy visiting the IBRCE - certainly worth the sleepless night. IBRCE offered, as always, enjoyable birding, great hospitality and I always have huge respect for the brilliant team working there. Birding was good fun with a Eurasian Nightjar ringed, Citrine Wagtail, Little Bitterns and lots of shrikes (eBird checklist here). Thanks Rony for the nightjar photo. 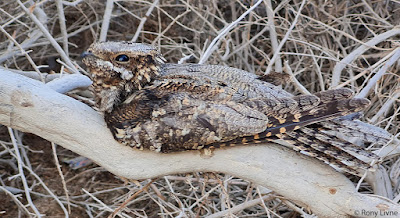 Our aim for the pelagic trip was to follow up on Noam Weiss's stimulating pelagic a few days earlier, where he reported a larger and heavier dark-rumped storm-petrel, raising the possibility of Matsudaira's Storm-petrel (read Noam's write-up here). Eventually we set off at 08:00, made our way very close to the border triangle with Egypt and Jordan, and started chumming a fair distance north of the border. The northerly wind was blowing harder that the forecast had predicted, so the chum slick slipped quickly south too close and beyond the border. We scanned the sea and the chum slick back and forth, again and again, excitement and anticipation slowly transforming into despair. It took a good two hours of seeing nothing until Noam yelled first 'storm-petrel!'. Adrenalin levels peaked - it was very distant, at the very far end of the chum slick, on or beyond the international border, but we had a dark-rumped storm-petrel! We had prolonged views of the bird, trying to get as much on it as possible, then it was joined by a second! Little by little, despite the distance, we managed to get enough details to figure out they were both Swinhoe's Storm-petrels: small size, small bill, narrow tail fork. Nothing out of the ordinary. Still very nice but quite normal - over the last decade it became evident that Swinhoe's is a regular summer visitor to the waters off Eilat. I was happy though - year bird for me, and my first photos of the species in Israel and globally. My photos are poor indeed - the birds were always distant, and they're tiny; these are the few photos that included anything but beautiful blue sea and white wave crests. 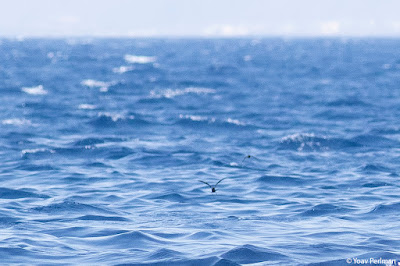 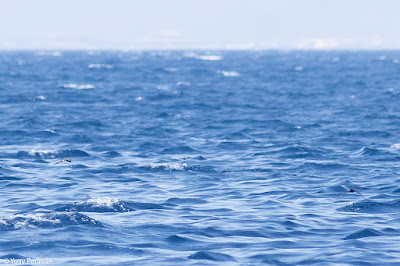 Blow up of the photo above, showing nice coverts panel and pale primary bases 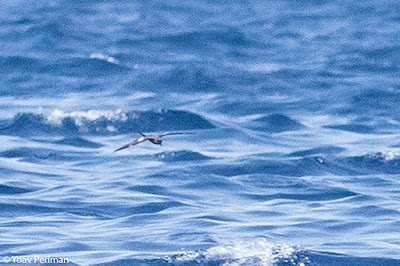 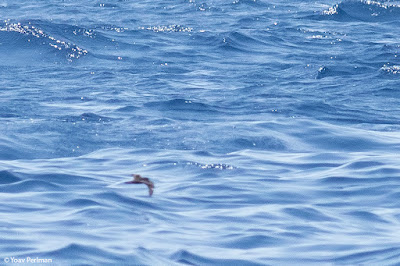 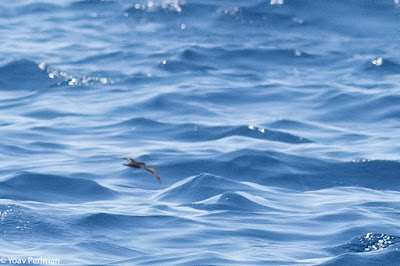 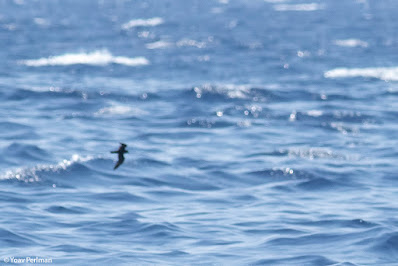 Here are a couple of photos courtesy of Amir Balaban, better than mine 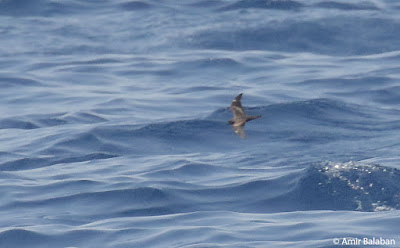 The two birds continued to feed on the slick in tandem for a while, zipping back and forth across the now large chum slick, sometimes dropping down to feed, occasionally approaching a bit. Then we noticed a third bird! It consistently kept its distance from the two Swinhoe's in tandem. Frustratingly, it always stayed at the very far end of the chum slick and never approached our boat even a little. It was very difficult to get any details on the bird. A couple of times it gave an impression that it is perhaps larger and heavier (a few of us called that out independently), but we never saw the third bird close enough and in direct comparison with the two Swinhoe's; it was too distant for any detailed views, nonetheless for photos. Eventually, the chum slick drifted too far south, across the Egyptian border, and we had to leave the slick and the birds.

We established a second chum slick further north, and after a while two Swinhoe's Storm-petrels visited it, typically flying past quite high and in direct flight vector. Sadly, the third, unidentified bird never reappeared. Somewhat disappointed, we tried and tried until it was time to head back. Amazingly, the commonest seabird family we saw during the entire pelagic was storm-petrels. Other than that, we had only two White-cheeked Terns and that's it. eBird checklist here.

The way back to Eilat was characterised by mixed feelings. On the one hand, how bad can a day with two Swinhoe's Storm-petrels in the Western Palearctic be? On the other hand, we were unable to resolve Noam's mystery, and were frustrated by that third, unidentified bird that slipped away.

Thanks to all the team on board, especially to the organisers Rami and Amir.