To tick or not to tick, that is the question

On Sunday a farmer working his fields in Urim area, south of the famous powerline, photographed a young Northern Bald Ibis. The news was released only the next day. In the photos a blue ring could be seen but the code was not readable. I searched for it on Monday, without success.

Fast forward to this morning - a different farmer working near Gvulot, about 10 km away, photographed a/the ibis again. I went into 'Fast Response' mode, met up with Amir and within a few minutes we relocated the bird (first spotted by Amir) - my heart stopped. We watched it from a fair distance, feeding along the edge of an irrigated peanut field. It walked and foraged in our direction, until it reached a reasonable distance and turned around, offering us wonderful views in harsh light conditions. The ring code was read - BLV. We left the bird in peace, knowing that hordes of twitchers are on the way. 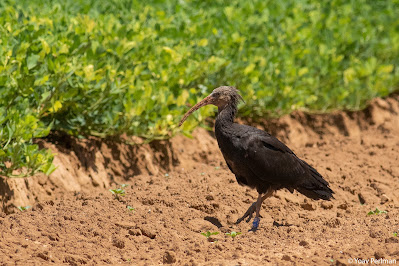 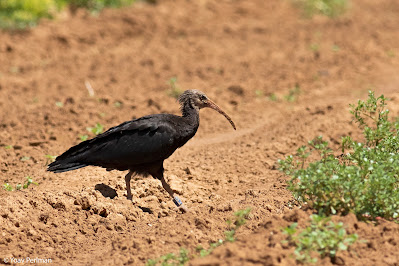 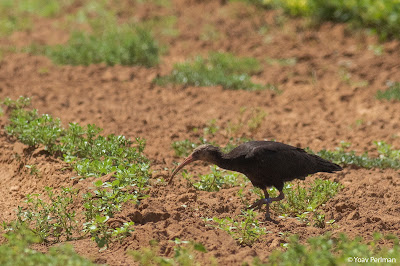 I communicated with Mustafa Çulcuoğlu who coordinates the work at the ibis colony in Birecik, and confirmed that this bird is from Birecik. Mustafa kindly provided information on BLV. It hatched this summer in natural conditions. BLV is part of a cohort of 15 young ibises that were released and allowed to migrate on July 8th. The rest of the colony gets trapped every year before migration, to prevent them from finding their inevitable death flying past the gun barrels of the Middle East.

Amir, Rami, Rony and I visited the Birecik ibis colony in 2012. It was good fun back then, and we met Mustafa - he still remembered us today! 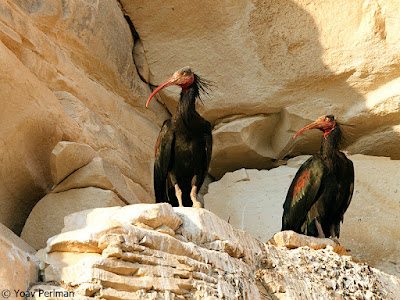 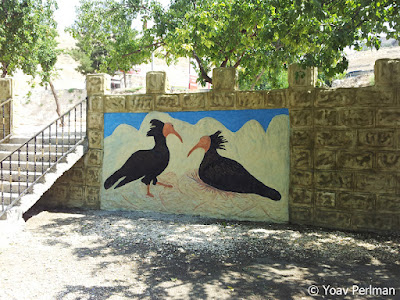 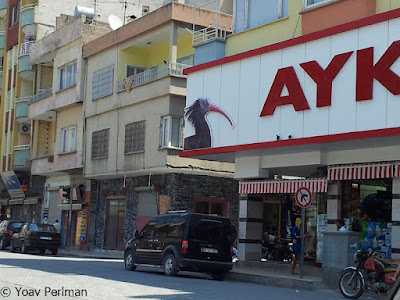 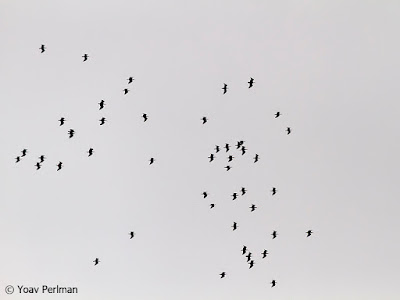 So, there's a dilemma here, whether to tick this bird or not. 'BLV' originates from a natural population, its parents are wild, and it hatched this summer in natural conditions. It follows traditional migration timing and maybe route. However, this colony has been manipulated by humans (for their safety apparently) for a few decades already. It feels somewhat awkward to tick this bird. Let's wait and see. In any case, it was a wonderful bird to see. So rare and special.

A bit more information about the Northern Bald Ibis: Until the 1990's the Northern Bald Ibis was wiped out from almost its entire range, from Morocco to the Middle East. It was classified as Critically Endangered, and its global population was less than 70 birds! Since the late 1990's the Moroccan population is faring better, now numbering close to 1000 birds. While the Syrian population became extirpated completely, the Turkish population is steady of slightly increasing, due to the efforts by Mustafa and his team and colleagues in Turkey. Now, it is classified as Endangered (this link provides further information about its conservation and ecology).

In Israel, until the 1970's and early 1980's there were a few records of migrating birds, probably originating from Turkey and Syria. All this ended just before I started birding. In January 2007, the superhuman Carsten Rohde found three unringed birds in the Jordan Valley, but the news came out too late and they were never seen by anyone else. Therefore, I have never seen a proper Northern Bald Ibis in Israel (for a few decades there was a small population of free-flying birds around the Zoological Gardens of Tel Aviv University, but they obviously don't count). That's why I was keen to see this Negev bird. Putting aside the silly game of listing, it is great to see some Turkish birds migrating again. I hope that their flyway will become safer for them in the future.