Last night was pretty special here in Norwich. Land-locked Norwich does not experience much active migration. But somehow, moon and weather conditions last night (and in the night ebfore too) were just right, and lead to active nocturnal migration over the city. 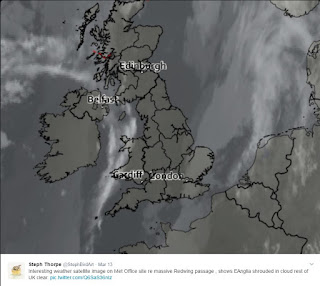 After dark I was at home busy with routine family duties. But when messages on Twitter and on our local Whatsapp group started pouring in, I deserted my parental roles and headed out to listen. 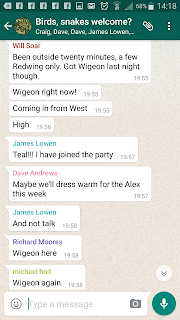 I immediately started picking stuff out of the dark. At first I was joined by my son Uri, then he moved in and I stayed out. I also communicated with Dougal that lives across the road from my house, so we helped each other out increase our garden year lists. We whatsapped or tweeted out everything we heard, to help others in our friendly little competiton - Norwich Garden Bird List. Most dominant call of the night was Redwing. They were calling almost constantly. During the two hours I listened last night, I must have heard more than 50 calls. One can only guess (or use a radar...) how many birds actually passed over central Norwich last night. It is very cool to imagine these Redwings over the coast 30 minutes later, and then arrive in Norway the next morning after a night of migration over the North Sea. The Magic of Migration.
Especially in the earlier part of the evening there was very active movement of ducks. It is cool how vocal they are on the wing! Wigeons were especially vocal, but last night I also heard Teal and Mallard. I am not sure whether these birds were true migrants, or just local birds moving between forgaing and roost sites.
Later on at night, myself and other observers (listeners) had nice shorebird movement. I had four shorebird species last night (!), three of them new to the garden list: singles of Ringed Plover, Redshank, Oystercatcher and Snipe. Over UEA there were also Green Sand and Curlew. Again, I am not sure if these are active migrants or just birds moving around between wetlands. The nearest wetland to my home that might hold these species (Earlham Marshes) is about two miles away, so I was really happy to get these. 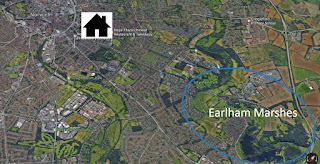 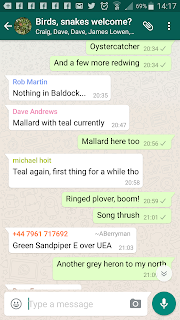