Had a great day in N Norfolk with James, Terry and Marie. Our main focus was geese - the large pinkfeet flocks attracted some quality geese over the last few days. We set an aim to see 14 goose taxa today but ended up with only eight... We started early around Syderstone and Docking. Scanning our own flocks produced little more than a few Tundra Beans, some Euro Whitefronts, a wild-looking Greylag, and a couple of funny hybrids. But hey, we didn't get bogged which was an achievement. As normal in these conditions, birds are distant and the best one can expect is crap digiscoped record shots.
After some time others relocated the Red-breasted and the Todd's Canada side by side, north of Docking (thanks Ben for gen). We headed over there and the birds were on show. A mile away but scope views were good. Photos were, ehmmm... But great to see these two quality birds in the same scope view. This is my first 'wild' Canada Goose in the WP, and only my second-ever Red-breast. By the attention it receives from local birders, it should be 'wild' too.

The Beauty and the Beast: Red-breasted Goose and Todd's Canada Goose, with Pink-footed Geese
Digiscoped through Swarovski ATX95 with Samsung Galaxy S5 and Novagrade adapter 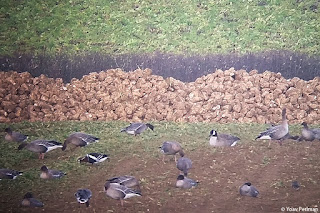 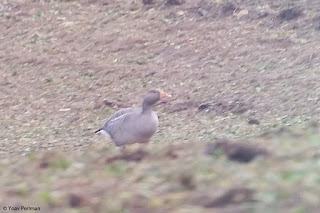 Funny pigment-challenged (thanks Dave!) Pink-footed Goose. When I first saw its head, I thought it was a Lesser Whitefront. It clearly isn't. Sorry about the quality - a very long way away. 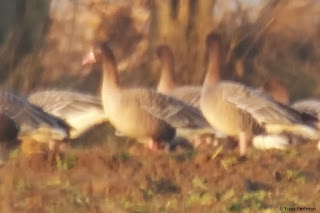 According to part of our team, the day's highlight was a brilliant breakfast at a secret N Norfolk spot: 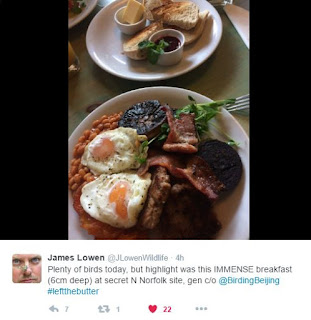 While we had a quiet and cosy breakfast, outside things were happening. We moved on to Titchwell for some quality seaducks. When we got there, Storm Barabara had hit the coast and the weather was quite horrible. We were greeted at the carpark by this friendliest Robin, demonstrating pure Christmas spirit. James didn't miss an opp to pap him, and got down and dirty. Hardcore wildlife photography. 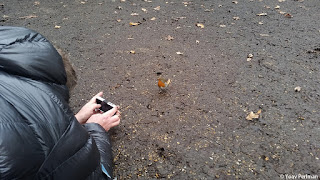 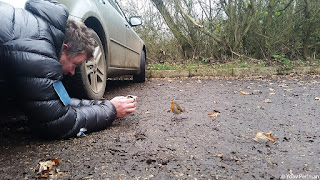 Braving the storm, we headed down to the beach. We had a quick look on the freshmarsh, and amazingly James picked up this adult Yellow-legged Gull, despite his frequent declarations that he doesn't do large white-headed gulls. 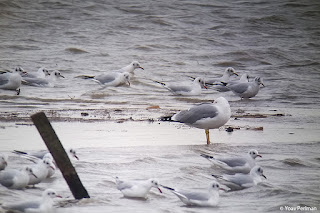 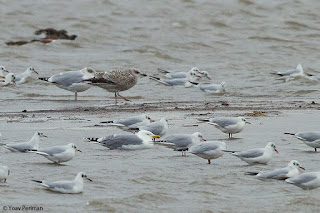 One Water Pipit was on the freshmarsh too. On the beach it was pretty awful. The wind was so strong we couldn't stand up. Hunched under the concrete blocks, trying to find some shelter, we scanned the large raft of seaducks bobbing up and down on the choppy sea. The crazy wind had pushed them away from shore so views were less than great. But still it was quite fun with quality. There were over 25 Long-tailed Ducks, 6-7 Velvet Scoters, 1 Slavonian Grebe, 1 probable Black-throated Diver. I just love long-tails - great birds: 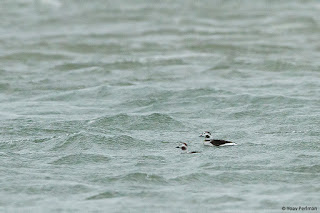 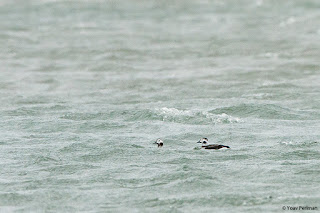 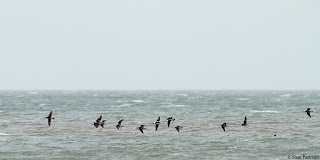 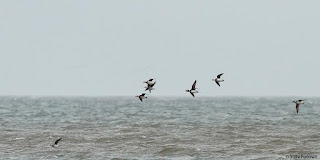 On the way back we paid a visit to the Ferruginous Duck on Pat's Pool. I would not twitch this bird independently, but the others were keen so why not. When we got there we scanned hard through the distant tufted flock and couldn't find the bird! Then we were shamefully told by other birders it was right under our nose, mooching about with the dabbling ducks. The sky darkened then as a result of the fading light and intensifying storm. Another set of excuses for rubbish photos. It was time to head back home. 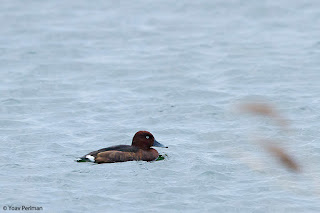 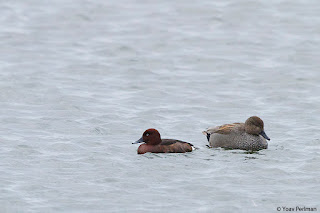 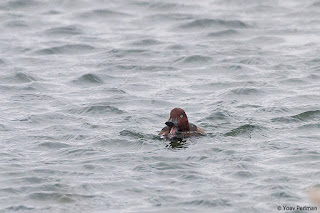