Today I cleared one of the largest gaps in my WP list - Greenish Warbler! I went to see the individual that was found yesterday at Gunton in Suffolk, just north of Lowestoft. I don't know who found it but whoever it was - it is a good find - not an easy site to work. Anyway, took advantage of the long daylight (light? not really, something like daydark) hours and drove down there after work. I joined the small group of birders there and very quickly I found it but it showed for about two seconds only, very brief but rather good views. Too brief for a photo. We stood around for another hour or so until it eventually showed for another 4-5 seconds... This time I was ready with my camera and fired off 15 images in 2 seconds... Shit light and it was about 20 m away hence the crap photos. But hey, better than nothing. Sadly it did not call or sing at all. Then I had to go home. 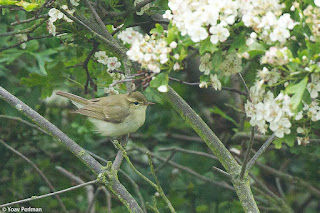 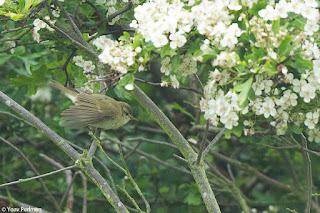 Just a small practice for fun. In this image the very rounded wing is apparent, and the important in-hand ID features are visible: 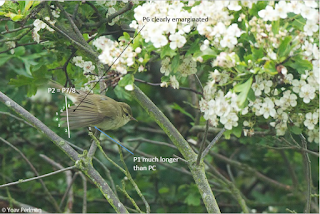 I have a bit of a relationship with Greenish Warbler. Unrecorded in Israel, I was sure I would see it easily in the UK. I arrived in early September 2014 and there was one at Winterton a couple of weeks later, but I didn't have a car yet and knew nobody who could take me. Then about a year ago I missed one on Blakeney Point. Since then almost all my birding efforts in the UK were directed towards this little taiga breeder. I had only Greenish Warbler on my mind. And here it is, safely on my list. Now I need to find one myself.
פורסם על ידי Yoav Perlman ב- 12:13 AM