Had a very nice trip down to the southwest. Lest Norwich Friday morning. My first stop was at Bray GP (Berks) for the Ring-necked Duck that took up residence there. The bird was showing staright away in the pit by the M4 with some Tufted Ducks. Great looking bird! And a WP tick for me... 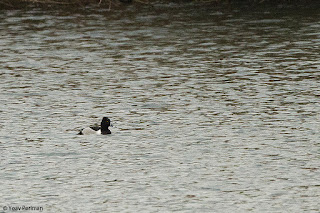 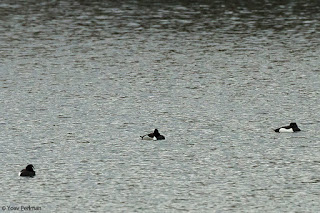 The bird was lovely but I did not enjoy watching it - this pit is fenced off and surrounded by trees, so I had views of the duck mainly through branches. But there was lots of passerines there - many Redwings and few Fieldfare, and bird numbers of Siskin and Lesser Redpoll. But I had no time to linger there - I had another ringed bird waiting for me.
My next stop was at Blashford Lakes (Hampshire), where I met up with Dave, my host from CHOG. We didn't have to wait long for the Ring-billed Gull to arrive to the roost. We had OK scope views but photography was very difficult - combination of distance (maybe 300 m?) and dim light. Anyway, even in these terrible record shots it is sort of identifiable - heavy bill, pale mantle tones, faint white tertials crescent: 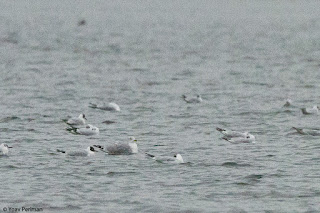 And in this image it is possible to see the limited white mirror on P10: 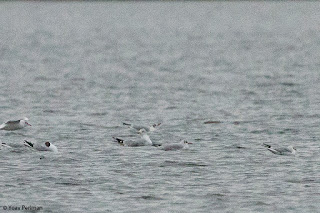 Another fine gull there was this 2nd-winter Caspian Gull: 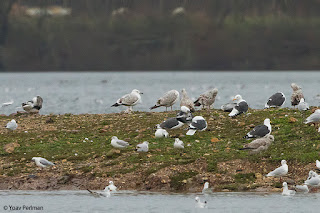 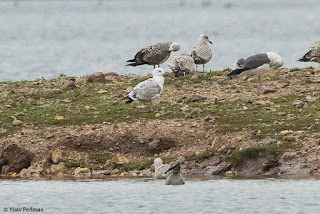 Also 3 Med Gulls joined the roost. This site was really good - Slavonian and two Black-necked Grebes, Goosanders and Goldeneyes, pretty good. And the gull roost is impressive.
In the evening I gave a talk to CHOG in Bornmouth, so quite many friends from Hampshire Bird Club joined as well. I really enjoyed the talk and I hope the audience enjoyed it too.
This morning I met up with Dave, Dave and Chris. The weather was pretty foul so we opted for seawatching off Milford-on-Sea, or rather watching the sea because there were few birds. We did have a Black-throated Diver and two Red-breasted Mergansers but very little else. A few Med Gulls were playing around on the promenade: 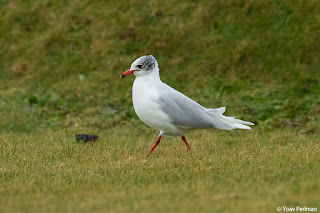 After a couple of quiet hours of watching an empty sea we decided to brave the weather and bird around Keyhaven Marshes. In recent days the marshes held Long-billed Dowitcher and Long-tailed Duck but the weather was so bad that we didn't see much. Even the locals complained about the weather ('near-impossible conditions' they called it).
And then it was the long way back home.
Many thanks to CHOG and especially to Dave for inviting me and for the warm hospitality.
פורסם על ידי Yoav Perlman ב- 1:05 AM