This weekend I participated in the 27th British Birdwatching Fair at Rutland Water, better known as THE Birdfair. I was part of the Israeli Ornithological Center team, together with my good friends and colleagues Jonathan Meyrav, Dan Alon, Meidad Goren, Richard Melzack and Anette Ashton. We promote birding in Israel, and this year the event was amazing. For me personally is was a very special birdfair. First of all, for the first time my family came along with me. My wife and the kids participated in part of the many family activities at the fair most of the time, but it was great to have them around. Second, it is my first fair as a UK resident. Since I moved here almost a year ago I extended my network of friends and colleagues even further, and it was so good to meet up with so many friends. It was especially good to meet Facebook friends in person and create real friendships. Another important factor that made this year's faie special is the main conservation cause - to tackle illegal bird killing around the Mediterranean basin. I was personally involved in the preparation of the recently published BirdLife International report, describing the horrendous slaughter of birds in the region - at least 25 million birds annually! This year we focused our efforts to promote the Champions of the Flyway birdrace, that is part of BirdLife's campaign to stop the killing.
On friday I participated in the traditional BirdLife reception to all BirdLife partners, held at the RSPB stand. It was a warm and friendly event, and I feel proud to be part of this family. Here are the relatively new BirdLife CEO Patricia Zurita and RSPB director Dr. Mike Clark talking about conservation and friendship: 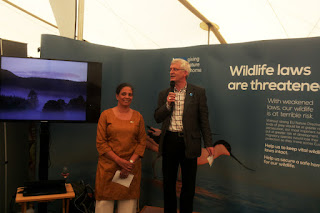 We had our own event as well. On Saturday we launched Champions of the Flyway 2016, and announced that Birdlife Greece will be the recipients of the funds raised by the teams. So many friends and supported showed up to the event - it was awesome. Last year's Knights of the Flyway, Next Generation Birders, handed their prize, Swarovski SLC 10X42 bins to Birdlife Cyprus, that hopefully will help them with their fieldwork to stop the crazy hunting going on over there. 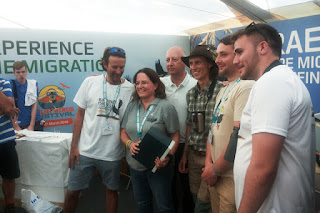 Personally I took part in many meetings alongside the fair, mainly to try and gain more support for the Champions competition. Hopefully next year's competition will be even greater than previous years, including this bloke who might come over, either in the BTO team or independently. My boys are great fans of Chris Packham, so I took the opportunity to take a family selfie. My boys are in heaven. 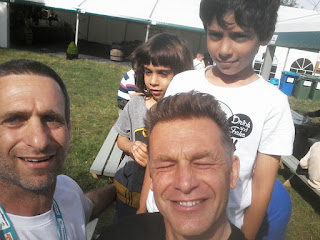 This is one of the most impressive events of the fair - the famous mural depicting the beauty of the Mediterranean region and its birds, that are threatened by hunting. Many artists work on this mural, here are Steve Cale and Jackie Garner: 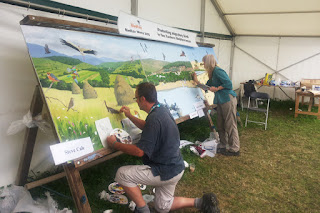 I can't walk more than ten steps at Birdfair without stopping to chat with a friend. It is amazing. The networking is incredible, and the constant talk and interaction with friends and colleagues was quite overwhelming. But in the end lots of laughs and smiles made the effort well worth it: 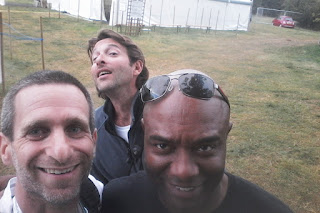 I will meet many of the friends again in two weeks time at Migfest in Spurn, looking forward to that very much. Birdfair was great but there were not enough birds involved in it, mainly bird talk. On the lake there were Black tern and Great White Egret, and flying around some Yellow Wags, and Red Kites, but that's it more or less. News of an elusive Booted Warbler not far from home got me slightly itchy and twitchy towards the end - hope to connect with it tomorrow.
So till next year, chapeau and many thanks to the organizers, mainly to the legend Tim Appleton. It was a superb event, and i am already looking forward to next year!