After yesterday's news of Paddyfield and then Greenish Warblers on Blakeney Point, that was too much for me and today I went there with Drew. Blakeney Point is another of these mythical sites I heard about so much, and today was my first visit to this special place. We left Norwich ridiculously early, and arrived at Long Hills before 06:00, with almost no-one else on the point apart for another birder (Peter) who arrived with us. The walk was nice with lots of breeding birds on the shingles - Avocets, Little Terns, Ringed Plovers etc. Quite a few Gannets flew past.
It took us about an hour of searching and waiting around the fenced area until we got some views of the Paddyfield Warbler. Mainly flight views, but at a very close range and we did see it perched for a second once, complete with supercilium. Luckily it's not a WP tick for me, but those who did tick it today had, well, not the best views in the world. I would not tick it with flight views only, and I think that later on during the day the bird showed even worse.
After leaving the paddy in peace (until the twitchers who stayed at home waiting for news arrived), we continued to search for the greenish. Personally I was much more interested in the greenish as it would have been a WP tick for me, but unfortunately we couldn't relocate the bird. I spent several hours walking through the Suedea bushes but no sign of it.
However, at about 07:15, just as we arrived on Rusty Hills, I noticed a tern flying east past us. I lifted the bins up, and saw a Sandwich-sized bird, but hey the bill is orange! I noticed the bill colour only when it was going away from us. I quickly got the others on the bird, but it was flying east strongly, and into the sun, so the views were not good. However I did notice darker silvery grey to the upperparts. Also something in the jizz and flight action looked different from sandwich, hard to tell what. The two other observers (Drew and Peter) had the same impression like me. About the bill colour - I am pretty sure it was orange. Later on, for comparison, I watched Sandwich Terns flying past in similar conditions and I could clearly see that their bill is black. I saw the bill colour in bad conditions but my opinion is that it was possibly a Lesser Crested Tern, that I am familiar with very well in Israel. I have little experience with Elegant Tern. I really hope this bird gets refound on Blakeney Point or in another tern colony elsewhere in the UK.
While searching for the greenish warbler I found an wrecked Gannet. I picked it up to assess its condition, only to discover that it was infested with lice. Poor bird. Took me all day to remove the last lice from my clothes and body. We passed the bird on to the BP wardens. 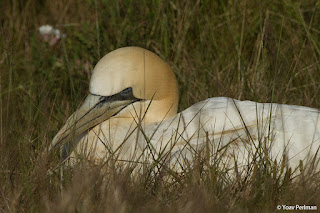 Again I was amazed by how few migrants were about. Incredibly the only migrant on the whole point was this paddyfield. Yesterday there were two migrants... 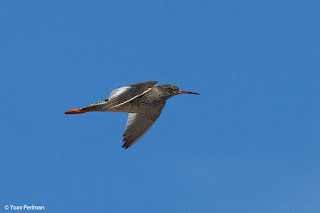 The walk back was uneventful. Nice weather with increasing easterlies. Torrential rain now outside so tomorrow morning might produce something. Maybe another greenish? 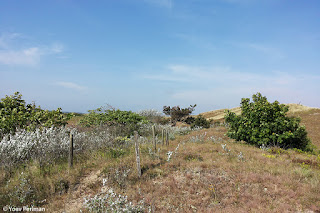 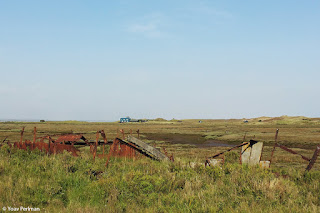